"We will never go to Thailand again," son of the elder couple, that was heavily beaten while walking down the Thai streets, said. 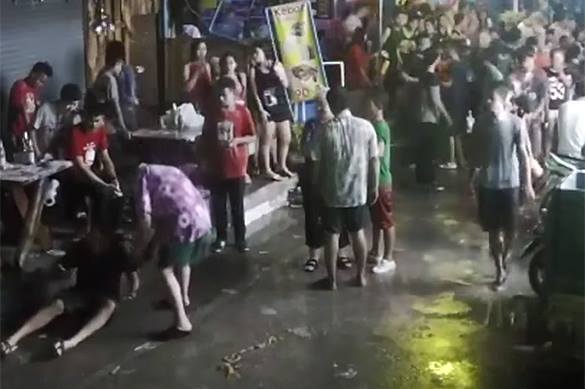 The British tourists Rosemary and Lewis Owens were assaulted all of a sudden by a crowd, as their son allegedly brushed a local hooligan. The drunken brawler spilled some of his precious drink and then kicked a 43-year old son of the Owens.

Video evidences how he fell onto the ground and hit the head against pavement. 68-year old Rosy Owen tried to settle the conflict peacefully, however the Thais kicked her in the jaw and she fainted.

A passing-by tourist from England tried to intervene, but he also fell victim to the vengeful crowd.

The incident took place on Wednesday at about 2a.m. in a popular among tourists beachside resort of Hua Hin.

As Dailymail reported, 43-year-old son of an elderly couple works as a graphic designer and decided to visit his parents in Thailand, who had been on holidays for over a month there. For the time being they are hospitalized. Face of Rosy is badly damaged. Lewis Owen has six stitches in his forehead.

Reaction of the Thai media should be noted. As several newspapers wrote, "they are lucky to not being stabbed with a knife".

Also read: Enjoy your holidays in Malaysia and Thailand. We are all Rohingya