Heavy monsoon rains in Mumbai collapsed the megalopolis. Road, rail, and air traffic have been taken out of operation. 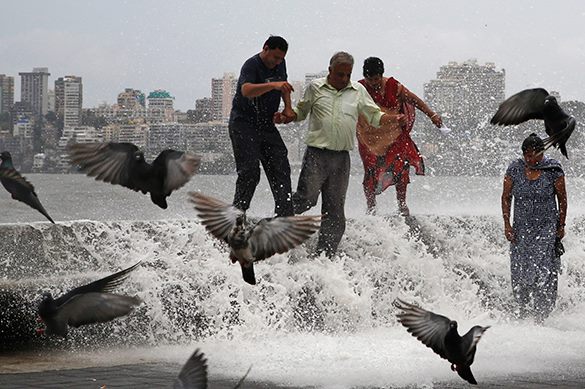 An abnormal amount of rain has battered the city since early Friday.

Thousands of commuters leaving for offices were caught unawares on reaching the suburban railway stations as trains were cancelled due to water-logging of tracks following heavy overnight rain.

All services are expected to resume as soon as the water level recedes, but commuters are still stuck at suburban platforms.

The rain effected air traffic as well, as three flights, starting with a Jet airways flight from Chennai at 10:30am, were diverted to nearby Ahmedabad.

"The situation is currently under control but if it continues to rain delays might pile up," said a senior air traffic control (ATC) official requesting anonymity.

Airport officials were also worried about water logging on the airfield. "One end of the main airstrip is prone to flooding," added the official.

Helicopter services were halted as the Juhu airstrip, the country's busiest general aviation facility, was under 3 feet water.

There seems to be no let up in the situation with the meteorological department predicting very heavy monsoon rains during the day in some areas.

Roads in most parts of Mumbai and its suburbs remained flooded at noon.

According to information given by the control room of Brihanmumbai Municipal Corporation (BMC), water-logging is reported in areas like Kurla, Chembur, Tilak Nagar, Andheri, Parel, Lower Parel, Thane, Navi Mumbai and Dombivili.