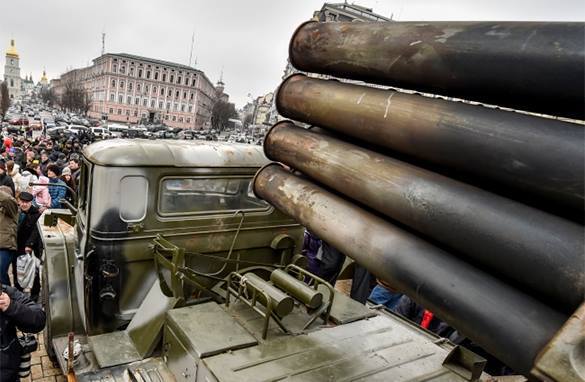 The current week in Kiev was marked with an exhibition of weapons that were used during the so-called anti-terrorist operation in the south-east of the country, representatives of the Verkhovna Rada said. The exhibition was organized to prove the "facts of Russian aggression in Ukraine."

However, the exhibition was rather a demonstration of ignorance and lack of appropriate skills among Ukrainian military experts. Most of the displayed weaponry  was in no way associated with the Russian defense industry. At the same time,  Ukraine invited authoritative experts from Poland, Lithuania, Latvia, Estonia, Bulgaria, Spain, Georgia and some other European countries for the event.

For example, the exhibited modification of the first generation of the T-64 tank was invented and produced in 1985-1987 at the Kharkov construction bureau & machinery plant (currently Ukraine). The last training T-64s had been completely removed from the operational use of the Russian army by 2011.

The BM-21 Grad is a legendary Soviet truck-mounted 122 mm multiple rocket launcher, developed during the 1960s. It was produced till 1988. As to 1995, there were more than 2000 launchers in active service of 50+ countries, including Ukraine (315 units in 2012). The Ukrainian Grads were used against civilian population of Donbass since last summer. Russia refused from the use of such systems several years ago.

In addition to defense equipment, the exhibition presented burnt Daewoo Nexia vehicles that were allegedly used by militia. It is worth noting that the Russian army does not use vehicles of this brand.

Exploring the materials of the exhibition, one can conclude that the Ukrainian government is doing its best to conceal the shameful failure in this war.

Read more on the subject in the original article here