Pravda.Ru interviewed Theda Skocpol, an American sociologist and political scientist at Harvard University, about the causes of the current riots in the United States. 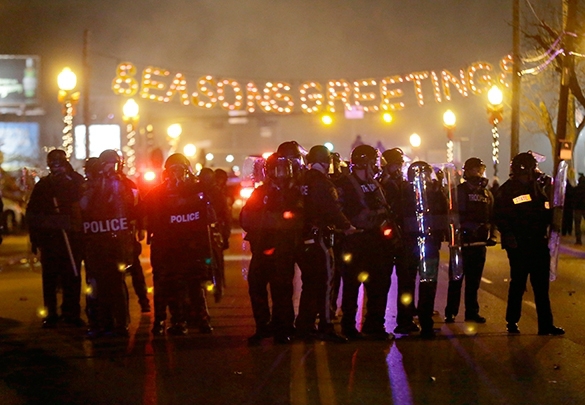 "The non-guilty verdict for the police officer, who killed black teenager Michael Brown in Ferguson, triggered a new wave of riots in the US. Protesters set cars ablaze, shoot guns and loot stores. Why was the jury made up mostly of white citizens? After all the town itself has mostly black population, doesn't it?"

"It was a grand jury, already in place, I believe, for St. Louis county.  The authorities decided right after the incident to hand this case to a controversial prospecutor in St. Louis county, where the overall racial balance would be different from inside ferguson itself."

"US police arrest black people three times more often than they arrest white people, according to The USA Today. Is it a racial prejudice of the police, or is it connected wit problems in US democracy system?"

"There are many reasons for poisonous relationships between police and some, not all, U.S. minority communities. Police can use procedures that reduce tensions, but the Ferguson department has not done most of the things that could have been done.  High crime rates, the harsh tactics police use everyday, and the fact that in many places the police do not live in the communities they work in - all of these are ingredients for trouble. The area around St. Louis may have many factors together that lead to bad police-community relations. Not all areas of the USA are the same."

"How common is discrimination of racial minorities in the US? What is it expressed in?"

"Racial tensions remain high in some areas and among some groups."

"Is it an uprising of the black America against the white?"

"Urban unrest over harsh police practices has happened repeatedly over the decades."

"Is it normal that the US teaches democracy to the whole world at the time when the country has serious problems with democracy on its own territory?"

"The US has many excellent features for its democracy and many problems too, just like many other nations.  Ethnic and racial tensions exist all over the world. For African Americans in Ferguson, the best step forward they could take would be to register to vote and vote in much higher numbers. If they do that, they have the power to change police procedures and the composition of the police in their community over time. Some communities, for example, require that police be residents of the community itself to be employed on the police force.  In the past, unfortunately, Ferguson citizens have not voted in high numbers.

Theda Skocpol is an American sociologist and political scientist at Harvard University. In 2002-3, Skocpol was president of the American Political Science Association. Known for: States and Social Revolutions, Diminished Democracy