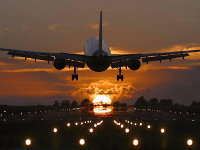 A passenger plane of TransAsia Airline crashed while performing an emergency landing at the airport of Penghu archipelago in Taiwan, Chinese newspaper People's Daily reports.

According to most recent reports, 51 people were killed, seven were injured. On board, there were the total of 58 passengers and crew members.

The crashed plane is a twin-engine medium-range turboprop ATR-72. The aircraft can carry up to 74 passengers on board.

According to unconfirmed reports, the plane crashed into residential buildings, Interfax reports.