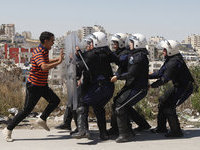 The IDF launched an operation against the radical Hamas movement due to ongoing rocket attacks from the Gaza Strip.

According to The Jerusalem Post, the aim of the "Protective Edge" Operation is the cessation of terror against Israeli citizens. According to Haaretz, it is a series of air strikes of Israeli Air Force on Hamas militants in the Gaza Strip.

According to the IDF, Palestinian militants have fired more than 80 rockets in one day. Some of them, as stated by the Israeli military, were intercepted by "Iron Dome" air defense system.

The IDF has already announced the mobilization of several hundreds of reservists of civil defense, as well as staff officers.

The conflict between Palestine and Israel started to escalate again after the first day of the operation to search for three missing students of Jewish religious schools, who disappeared on June 12 near the city of Hebron. Israeli Prime Minister Benjamin Netanyahu accused Hamas of child abduction. On July 1st, the bodies of the teens were found on the West Bank of the Jordan River.