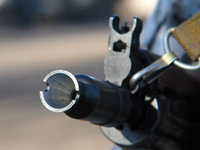 The explosion at the Russian-Ukrainian border, which took place on October 4, was organized by a militant, who was carrying explosives to Ukraine. The man, born in 1982, was registered in the city Chegem, the Kabardino-Balkaria Republic. He tried to cross the border in a mini bus with Moldovan numbers. The man was detained by border guards at Bachevsk checkpoint. Other four passengers in the vehicle, all citizens of Moldova, were not previously familiar with the terrorist. They picked him up on the road.

During the interview, the detainee exploded himself, wounding two guards, who were rushed to hospital in a serious condition.

For the time being, the goal, for which the gunman was heading to Ukraine, remains unknown.