In Nairobi, the Kenyan capital, gunmen arranged a massacre in a large shopping mall and took hostages. According to the Kenya Red Cross, at least 30 people were killed, more than 60 were wounded. There are many children and white individuals among the victims. The troops entered the building and help the horrified people out. 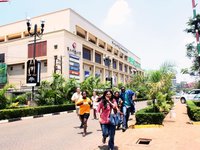 AFP news agency quoted a source in the local police and said that at least one gunman was wounded and detained during the operation.

The shopping mall has been encircled, snipers were placed on the roofs of the buildings nearby.

Westgate Shopping Mall sells branded goods. It is a popular destination among wealthy Kenyans and foreigners living in Nairobi. On weekends, the mall is usually crowded.

According to eyewitnesses, armed men broke into the mall and opened fire on people inside. They used grenades. The attackers seized an unspecified number of hostages. The militants have not announced any requirements yet to release the hostages.

According to the AP, the nearest hospital to the mall was overcrowded with patients during the first hour after the attack.

The Star said that the police used tear gas to disperse the crowd that prevented them from the evacuation of victims.

Initially, it was reported that the goal of the attackers is to rob the mall. However, the Ministry of Internal Affairs of Kenya, citing eyewitnesses, indicates that the attackers broke into the building, shooting indiscriminately." According to local media, they began to shoot people on the street.

The South African publication News24 said that the attackers were shooting the people of "non-Muslim" appearance. If it is an act of terrorism, Al-Qaeda's Al-Shabab is most likely responsible for the attack.

Al-Shabab had previously threatened to attack Westgate - the mall that is popular among the local wealthy population and expatriates working in Nairobi.

Some people were lucky enough to run out of the mall. AFP reports that the commandos managed to rescue the visitors of a toy store, many of whom were children.

Some witnesses say that before starting the massacre inside the building, the gunmen released all Muslim customers.

Another customer, Kenneth Kerich, said: "Suddenly I heard gunshots and saw people running all over the place. We dropped on the floor. On the floor, I saw two people bleeding, from gunshot wounds I think... We thought at first that it was the police shooting at the thieves, but we could not get out. Then an officer entered, fired into the air and told us to run."

An employee of the shopping mall, Sudzhar Singh said: "The militants tried to shoot me in the head, but missed. At least 50 people were killed. Definitely, a lot of people are dead ... I saw a boy of 5-6 years was being taken out in a shopping cart. I think he was already dead - he was not moving, not making a sound."

The Embassy of the Russian Federation has no information yet on whether there are Russian citizens among the victims.