Water begins to go away from Russia's flooded Far East 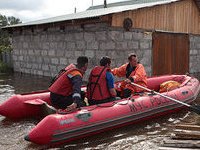 In the area of the city of Khabarovsk, the water level dropped by 19 centimeters within one day and currently makes up 601 cm. EMERCOM officials believe that the situation in the Khabarovsk region is gradually stabilizing.

Far East of Russia was flooded about a month ago. The state of emergency on the entire flooded territory is still in effect. As many as 77 towns remain flooded. According to most recent information, more than 3,000 homes with a population of over 36,000 people remain under the water.

According to the head of the information department of the Russian Ministry for Emergency Situations, Oleg Voronov, the situation in the Far East remains under the control of rescue services.