Thirty-four-year-old African-American U.S. Navy reservist Aaron Alexis went on a shooting spree at the Washington Navy Yard. The man's body, who worked in the IT- sector, was found at the scene. 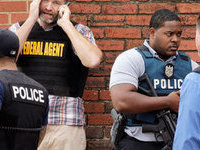 Alexis was an employee of Experts, a computer equipment modernization company. According to media reports, he finished his work for Experts in Japan and was expected to start working at Navy Yard, where he perpetrated the shooting. Noteworthy, Alexis has come to the attention of law enforcement agencies before twice, including for violations of the law about the possession of firearms.

The shooter killed 12 people on Monday; 14 others were hospitalized with injuries of various degree. The motives of the crime are currently being investigated.

U.S. President Barack Obama has already presented condolences to the families of the victims and called the incident an act of senseless violence.

In memory of the victims of the Washington Navy Yard shooting, U.S. national flags will be flown at half mast before September 20 at all government departments and agencies, military bases, ships, embassies and diplomatic missions of the United States.

Such massacres have become commonplace in the United States recently, generating heated debate about gun control that erupted after the Sandy Hook tragedy in Connecticut, when 20-year-old Adam Lanza killed 27 people, including 20 children aged from five to ten years. The shooter himself was killed in a shootout; according to other sources - he committed suicide.