Most Americans do not allow Obama bomb Syria

According to the poll conducted by The Drudge Report, the majority of Americans do not believe that Barack Obama has the right to bomb Syria. 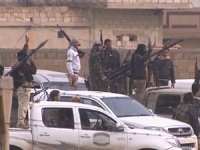 Almost 216,600 people have taken part in the vote on the website by today's morning, September 3rd. As many as 8.4 percent of the visitors voted "for" and 92 percent "against" the bombing of Syria.

It was previously reported that Obama could decide to launch a military operation against Syria, even if he did not receive the support from the U.S. Congress.

In late August, the head of the White House sent a draft resolution to the Congress to strike the Assad regime in Syria, having said that he had made a decision to take military action.

To crown it all, regardless of the decisions of the Congress, Obama reserves the right to start a military intervention even if the vote ends with a negative result.