One tourist survives massacre in Pakistan

The Russian Mountaineering Federation appealed to the authorities to evacuate Russian climbers from Pakistan. According to executive director of the Federation, Alexey Ovchinnikov, his organization filed a request to the Ministry of Emergency Situations. In addition, he added, his Ukrainian, Lithuanian and Georgian colleagues intend to appeal to the Russian Foreign Ministry to immediately evacuate the tourists from these countries and deliver the bodies of the victims to their homelands. 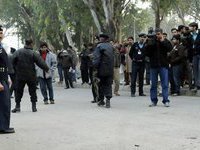 The tragedy occurred on Sunday, June 23, in the province of Gilgit-Baltistan. Gunmen broke into a hotel and shot ten people, including citizens of Ukraine, Lithuania and China.

The Russian Foreign Ministry confirmed that there were no Russian citizens among those, who were killed on Sunday night in a terrorist attack in Pakistan. Reportedly, the bodies of two Chinese, one Nepalese and one Lithuanian citizens have been identified.

The climbers were going to ascend to the summit of Nanga Parbat mount, which is considered to be one of the hardest mountains for climbing in the world.

One Chinese tourist survived the shooting of the group of climbers in Pakistan, Geo News reports. Nothing has been reported about the condition of the tourist. Interior Minister of Pakistan Chaudhry Nisar Ali Khan said that the goal of the extremists was to destabilize the situation and show the world that Pakistan was not a safe country to stay.

During his speech at the Parliament, Minister Ali Khan confirmed that the militants shot a Russian, five tourists from Ukraine, three from China and a local resident - their guide. The police chief of Gilgit-Baltistan and chief secretary of the region were dismissed from their positions because of the incident.