The Moscow police have blocked the production of nice-looking, but maybe not very healthy bread. An illegal bread bakery workshop was found in the center of the capital. Its employees, all of them migrant workers, were baking bread and buns for Muscovites tirelessly. Even when police officers entered the room, it took them quite a while to make the diligent employees stop working. 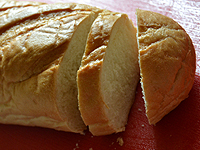 The bakers were living next to the workshop. Their living conditions were as usual: bunk beds, poor sanitation and no registration in Russia.

They had no documents that would prove their legal presence on the territory of Russia. Many work permits were fake. Most of those people will be deported to their native republics.

The bread that foreigners were baking in the illegal bakery, would then be sold at many Moscow supermarkets. Hopefully, no one suffered from eating that bread because the conditions in which it was made were far from being perfect.