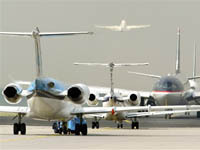 A passenger aircraft, flying from Perm to Moscow, was struck by lightning, officials with air traffic control services of the Moscow aviation hub said.

Reportedly, the flight crew of the Airbus A-320 reported during the flight that the airliner was struck by lightning. Traces of the lightning strike were found on the body of the plane after it landed safely in Moscow. No one was hurt in the incident.