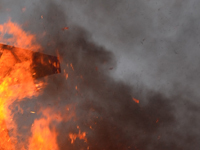 The bodies of six Russian sailors were recovered on board the ship that burned this morning in a port on the Japanese island of Hokkaido. Seventeen people managed to escape, three of them were rushed to hospital.

The crab boat Taigan under the flag of Cambodia caught fire in the morning of May 16th. The crew consisted of Russian and Ukrainian sailors. Six people found themselves trapped on the boat.

Six fire brigades and vessels of Japanese maritime security took part in the operation to extinguish the fire.