An earthquake measuring 7.3 on Richter scale has struck Japan in the northeast of the country on Friday afternoon, December 7. The Japanese Meteorological Agency issued a tsunami warning - the waves could be up to one meter high. 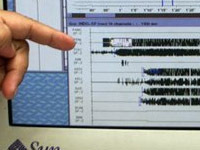 Buildings were trembling and swaying in the central Tokyo area after the earthquake struck at 5:18 p.m. local time. The latest quake was centered off Miyagi Prefecture - the same territory as in the mammoth earthquake of March 11, 2011. The March earthquake was stronger, magnitude 9.0, that triggered massive tsunami waves and killed more than 18,000 people.

Nothing has been reported about immediate damage from the most recent earthquake in Japan. Japan's national broadcaster NHK warned those living in low-lying territories of the country near the coast to seek higher grounds.

The 2011 earthquake off the Pacific coast of Tohoku was a magnitude 9.03 undersea megathrust earthquake off the coast of Japan that occurred at 14:46 JST (05:46 UTC) on Friday, 11 March 2011, with the epicentre approximately 70 kilometres (43 mi) east of the Oshika Peninsula of Tōhoku and the hypocenter at an underwater depth of approximately 32 km (20 mi). It was the most powerful known earthquake ever to have hit Japan, and one of the five most powerful earthquakes in the world since modern record-keeping began in 1900. The earthquake triggered powerful tsunami waves that reached heights of up to 40.5 metres (133 ft) in Miyako in Tōhoku's Iwate Prefecture, and which, in the Sendai area, travelled up to 10 km (6 mi) inland. The earthquake moved Honshu (the main island of Japan) 2.4 m (8 ft) east and shifted the Earth on its axis by estimates of between 10 cm (4 in) and 25 cm (10 in).