Passenger plane with 14 on board crashes in Russia, 4 survivors left

The AN-28 aircraft with 14 people on board crashed on Wednesday morning, September 12, near the village of Palana, in Russia's Kamchatka Peninsula. An EMERCOM helicopter found the plane about 10 km from the village on the slope of Pyatibratka Mount, at the height of 900 meters in the thickets of mountain pines. The aircraft was entirely destroyed as a result of the crash. Its fragments were scattered on a large area. 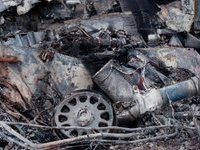 According to Interfax, ten people were killed and four were wounded. A child, who was one of the passengers, died soon after the arrival of the rescuers. There is also a 14-year-old girl among the victims. Like others, she suffered numerous fractures and a brain injury, officials said.

Currently, rescuers explore the area of three kilometers around the crash site to find a place, where an ambulance helicopter can land to evacuate the wounded. The survivors will then be flown to the regional hospital in Petropavlovsk-Kamchatsky.

The aircraft was flying from Petropavlovsk-Kamchatsky to Palana. Connection with the plane was lost at 12:28 local time. There were 12 passengers and two pilots on board.

The cause that led to the emergency landing remains unknown. According to officials, it could be either an engine failure or weather conditions. "There are downpours in the area, the clouds are about 400 meters above the ground. This could be a cause of the accident," an official said.