In Russia's St. Petersburg, about 50 youths attacked the visitors of McDonald's restaurant who were sitting on the open veranda of McDonald's restaurant near Moskovskaya metro station at night of August 22. Russian media explained the incident with the vengeance of Zenit football fans, who threatened to attack Anzhi fans after the game within the scope  on the Russian Championship in Makhachkala, Dagestan, which took place on Sunday. 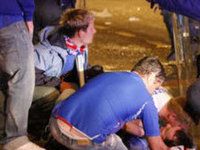 Officials with the Russian Premier League could not find a confirmation to this fact. It is possible that the hooligan fans decided to punish the offenders their own way.

Three citizens of Dagestan were hospitalized with injuries of various degrees after the brawl. Seven residents of St. Petersburg, who took part in the attack, were arrested, Fontanka.ru wrote.

At about 9:30 p.m. on Moskovsky Prospect, a group of 25-30 men "on the base of personal hostile relations" attacked three natives of the North Caucasus, officials said. Investigators believe that the incident was based on the conflict between Zenit and Anzhi football fans.

Eyewitnesses told Fontanka.ru that dozens of youths with faces hidden under the hoods broke into the veranda of McDonald's restaurant screaming and sweeping all before themselves. The terrified visitors ran in panic inside the restaurant, where the attackers did not break into. Those who did not manage to escape were beaten indiscriminately.

The perpetrators were beating one man from Dagestan on the veranda and then dragged him onto the street, where they continued the execution. Two passers-by tried to stand up for the victim, but the assaulters said that the immigrants "rape our women."