A turkey pecked at a 2-year-old boy in the temple in a village in Ukraine. The bird broke the child's skull brought in an infection. The parents brought the child to the hospital when it was too late, and the child died. 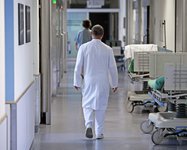 "Unfortunately, the child arrived in the state of clinical death. We, unfortunately, could not do anything, but everything was done to save this child", a neurosurgeon said. "There was a so-called anaerobic infection on the beak of the bird, to which tetanus is referred - we will find this out from the bacteriological analysis. This infection was extremely aggressive, and led to the development of purulent meningitis in one day," he added, MIGnews.com reports.

The police also investigate the responsibility of the child's parents.