Kolmarden Wildlife Park in Sweden is a popular tourist attraction with up to half a million visitors a year. On Sunday it became the centre of a horror scene as a pack of eight wolves launched a ferocious attack on their 30-year-old keeper, mauling her to death. 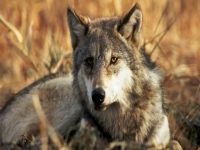 The attack happened around 11 a.m. Sunday morning at Sweden's largest zoo when the 30-year-old keeper entered the wolves' pen to treat the animals she had helped to rear when they were cubs. For some reason the animals launched a ferocious attack on her as she was treating them, alone in the enclosure with nobody around.

The alarm was given when she had failed to make radio contact with the authorities. Colleagues went to the scene but could not enter the enclosure due to the ferocity of the animals and the emergency services were called.

All they could do was to look on helplessly as the woman, still alive, was trying to fend off the ferocious animals tearing her apart in front of their eyes. The wolf enclosure was particularly attractive to visitors because they were allowed to go inside to pet the wolves.

There were no witnesses to the attack. The keeper had been working for three years at the zoo and had helped raise the wolves when they were cubs - staff often entered the enclosure alone.

Experts state that such attacks are extremely rare among wolves in zoos. It has not yet been decided whether the wolves will be destroyed.