A female resident of the city of Severodvinsk incidentally shot her dance partner from a traumatic gun. The accident occurred in a bar, during a dance contest. 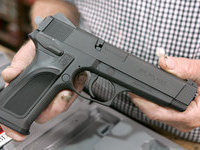 The contest was held at the bar at night on May 1. Two women and a 45-year-old man were taking part in the contest. A traumatic gun incidentally fell out of the man's pocket as he was dancing. One of the women, aged 25, picked the gun up from the floor and incidentally pulled the trigger.

The man suffered a serious injury of his artery and lost a lot of blood. He received first aid and was hospitalized urgently. However, the man died. Investigation is underway.

Pravda.Ru previously reported about an accident at a sports school in Russia's Buryatia republic. A teen boy was seriously injured during archery competitions. The man was coming out of the gym after the training, when he was hit with an arrow that another teenager incidentally launched.

The boy pulled the arrow out himself and informed his coach about his injury. The adults immediately called an ambulance, but the child died soon afterwards.