A series of explosions took place on Friday in Ukraine's Dnepropetrovsk. Officials with the Interior Ministry of Ukraine said that there were four explosions in the city. The bombs blew up one after another. Reporters said, though that the blasts continued after the announcement from the ministry. There were reportedly ten of them in total. The information about ten explosions was later rejected by the authorities. 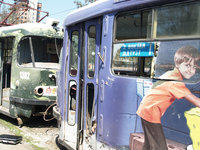 According to most recent information, there were 29 people injured, 25 of them were hospitalized. The Office of the Public Prosecutor of the Dnepropetrovsk region instituted a criminal case under article "Terrorist Act."

The first explosion took place at 11:50 a.m. in the center of the city, at a tram stop. The blast wave blew up the windows of the tram and the buildings nearby. The stop was partially demolished as a result of the explosion. The traffic was stopped.

It was said that at least five people suffered serious injuries in the blast. According to Ukraine's EMERCOM, 13 was injured; all of them were hospitalized. The bomb at the tram stop blew up in the garbage can. Sources at local law-enforcement agencies later said that the explosions could be conducted with the help of self-made explosives. Nothing has been reported yet about the power and the type of the bombs.

The second explosion took place in 40 minutes near the Opera Theater, near the railway station. The attackers had placed the bomb in a garbage can too. Eleven people were injured in the second blast, including nine children. All of them were hospitalized.

The news about the third explosion came soon afterwards. It occurred not far from Lazar Globa Park, at 12:45 p.m., near a technical school. Three students suffered light injures as a result of that explosion. Two of them were hospitalized.

Six other explosions occurred in the city one after another later. The fifth and the sixth bombs detonated in the area of Shmidt and Korolenko streets. Other explosions took place near Grand Plaza Trade center. Two other explosions ripped through Ozeyorka, Pravda and Naberezhnaya streets, Ukrinform news agency said.

The authorities of Dnepropetrovsk are taking emergency measures in connection with the series of explosions. Mobile phones in the city stopped working soon after the news about the first explosions. Apparently, the authorities decided to block cellular communication to prevent other possible explosions.

Ukraine's Interior Minister Vitaly Zakharchenko has left for Dnepropetrovsk. "I am flying to the city now to see the situation," he said and left the government building.

Ukrainian President Viktor Yanukovych was informed about the news in the Crimea. "I only know what you know, - he told reporters. - I've talked to the director of the security bureau and to the minister for interior affairs. For the time being, there is no other information. We know that there are victims, we understand that this is another challenge for us, for the whole country," he said.

The events in Dnepropetrovsk made the Ukrainian administration make an international statement. The officials promised to guarantee security to participants and guests of the European Football Championship in 2012. Several matches of the championship will take place in Ukraine's Kiev, Donetsk, Kharkov and Lvov in June.

Dnepropetrovsk was one of the candidates for the matches of the group tournament. "We take all necessary measures to guarantee security for the guests and participants of the Euro 2012," officials said.