Tornado destroyed the airport in the U.S. 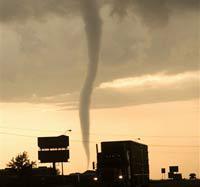 A powerful storm bringing a mix of heavy rain, hail and tornadoes through the St. Louis area caused damage to homes in St. Louis and St. Charles counties.

The National Weather Service reported the roof was blown off the main terminal at Lambert-St. Louis International Airport. Windows were blown out and power outages have been reported at the airport as well, informs.

The airport's main terminal sustained the most damage. Hamm-Niebruegge said roughly half of that structure's windows were blown out, sending glass and rain into that building. Elsewhere on the property, trees were toppled and power lines downed, further limiting access to the airport even hours after the storm left its destruction.

Passengers from at least two planes were stranded briefly on the Lambert tarmac because of debris but were later taken away by buses. An Air National Guard facility at the airport was reportedly damaged.

Unconfirmed tornadoes were reported in several counties in the St. Louis area, and at one point utility company Ameren Missouri reported more than 47,000 power outages, with another 7,000 reported in Illinois, according to.

The National Weather Service said witnesses believe a tornado was on the ground for several miles and observed the twister from a tower at the airport.

About 500 people were inside the airport when the storm hit, KSDK reported.

The station also reported that the storm blew the steeple off a church and forced authorities to close highways. Local hospitals reported admitting patients with cuts and bruises, reports.