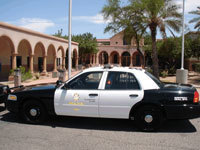 Cops fatally shot a Pace University football player early Sunday after he ran down officers during a brawl outside a Westchester County bar, police said.

The chaotic chain of events began around 1:20 a.m., after a homecoming game celebration at Finnegan's Grill in Thornwood, when officers responded to reports of "a large group of unruly patrons" outside, police said, New York Daily News reports.

According to police, Henry was driving off when an officer knocked on his window and asked him to stop. When he didn't stop, the officer radioed to a fellow officer for help.

When the second officer allegedly tried to stop Henry, he hit the officer with his car. Another police officer who tried to pull the cop off Henry's hood got hit as well, police said.

When Henry still didn't stop, officers opened fire on him and killed him, police said. An unidentified passenger in the car with Henry was also shot, but the wound was minor.

It is not clear if Henry was involved in the initial altercation, but police say he did not cooperate with their requests to stop driving, WBZ reports.