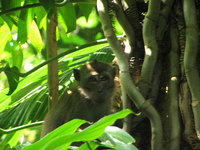 The four-day-old infant has been left alone for just a few minutes when she disappeared. Her body was found shortly later outside the home in central Negri Sembilan state, Malaysia's Star and the New Straits Times newspaper reported.

The baby, who was found by her mother and grandmother, had bite marks on her neck and face. Her father was quoted as saying a macaque monkey had been seen roaming near the house in recent weeks.

The baby's grandmother said that she was in the kitchen when the infant, who had not yet been named by her parents, was snatched, Telegraph.co.uk reports.

After the incident, local authorities shot and killed a male wild monkey which was believed to have been the killer.

According to an official, the monkey which killed the baby belongs to Long Tailed Macaca species which is a common species in Malaysia that does not usually attack human beings, The Epoch Times reports.