Polish tour bus crashes in Germany on its way from Spain, 13 killed 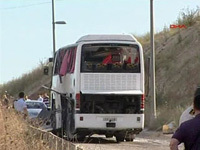 About 100 relatives of the victims arrived in the town of Koenigs Wusterhausen outside Berlin early in the day - many not knowing whether their loved ones were among the dead, said Piotr Antonczak, deputy mayor of the Polish town of Zlocieniec, where the people aboard the bus were from, The Associated Press reports.

Peter Salender, a police spokesman, said: "This is an appalling accident. We have not dealt with a crash like this for a long time." The autobahn was strewn with wreckage over a wide area. The accident happened in pouring rain.

The Polish families - the adults were employees of the Forestry Commission from the town of Zlocieniec - were returning home after a week away, Telegraph informs.