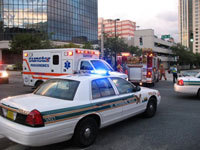 A law enforcement official speaking on condition of anonymity because the investigation was ongoing said authorities had identified James J. Lee as the likely suspect.

Lee, 43, who was upset with the channel over its programming, entered the building about 1 p.m., wielding a gun and wearing "explosive devices," and took a security guard and two other employees hostage, police said. The rest of the company's nearly 1,900 employees were evacuated from the building, according to Los Angeles Times.

After several hours negotiating with the gunman, tactical officers moved in when authorities monitoring him on building security cameras saw him pull out a handgun and point it at a hostage, said Montgomery County Police Chief Thomas Manger, The Associated Press reports.