The United Nations says four Spanish soldiers died when their helicopter crashed in mountains close to the Dominican border. The Spanish defense ministry in Madrid said that the helicopter and its crew had been returning from across the frontier. 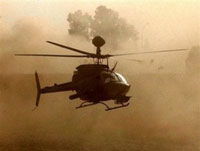 The helicopter was travelling with another aircraft when "they lost contact with each other due to poor visibility," the ministry said.

"A search operation then began and the damaged helicopter was finally spotted on the side of a mountain which was difficult to access," Deutsche Welle informs.

The crash took place near the town of Fonds Verettes the helicopter went down in rough terrain 50km (30 miles) southeast of the capital, Port-au-Prince near the border with the Dominican Republic. The cause of the crash remained unclear.

The four soldiers on board the helicopter were part of the UN peacekeeping mission in Haiti (Minustah).

The soldiers were part of about 450 Spanish soldiers in Haiti helping helping with the reconstruction efforts in Haiti after the devastating magnitude 7.0 earthquake there in January. More than 220,000 people died in the quake.