One of the two Pierce County sheriff's deputies wounded Monday after a drunken man ambushed and shot them while responding a domestic violence call has left a Tacoma hospital. He is on his way to visit his partner, who is fighting for his life in a Seattle hospital. 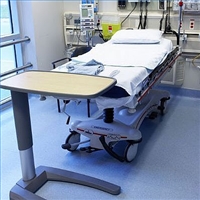 It was also reported, relatives and fellow officers gathered at Harborview, where Mundell, 44, is in the intensive-care unit with life-threatening injuries.

His stepbrother, Larry Stafford, told The Times he felt "emptiness, sick to my stomach" when he heard Mundell had been hurt.

Mundell, who lives near Puyallup, loves camping, boating and outdoor sports, Stafford said, and is a licensed pilot who owned a plane and has skydived.

"His motto was: 'If you're not living on the edge, you're taking up too much space.' That's how he lived his life," Stafford said.

Mundell married his high-school sweetheart, Lisa, more than 20 years ago, and dotes on her, his 16-year-old daughter and 10-year-old son, his stepbrother said.

In the 1990s, Mundell worked for a window and door company, becoming a midlevel manager, family members said. But he quit that job to become a sheriff's deputy, Seattle Times reports.

In the meantime, the Pierce County Sheriff's Office says Mundell and Hausner were shot Monday night in the rural town of Eatonvile by David Crable while responding to a domestic violence call at the home of Crable's brother.

Mundell was hit multiple times before firing back and killing Crable.

The shooting is the third in three months in which a gunman has taken aim at law enforcement officials in Western Washington. Four Lakewood police officers were killed Nov. 29. The suspect in that case was later shot and killed by police. On Halloween, Seattle Police Officer Timothy Brenton was killed while sitting in his patrol car. Suspect Christopher Monfort has pleaded not guilty to the murder, KING5.com reports.