In parts of the Philippines the government has declared a state of emergency after a massacre of at least 46 people, including 12 journalists. Press freedom groups have condemned the attack as the worst in history and express skepticism that those responsible will be brought to justice. 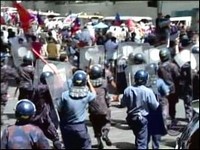 As more bodies were uncovered from the location of a massacre on the southern island of Mindanao Tuesday, President Gloria Macapagal Arroyo declared a state of emergency.

That allows the police and military to impose a curfew and conduct random searches as they hunt for those who carried out the attack, Voice of America reports.

It was also reported, police and soldiers found 22 bodies in a hillside mass grave Tuesday, adding to the 24 bullet-riddled bodies recovered near the scene of Monday's massacre in Maguindanao province, said Chief Superintendent Josefino Cataluna of the Central Mindanao region.

This southern region of the Philippines is wracked by violent political rivalries, in addition to a long-running Islamic insurgency, but the killings have shocked this Southeast Asian nation. One adviser to President Gloria Macapagal Arroyo has described the massacre as the worst in the country's recent history. A media rights watchdog also says that it appears to be the world's worst mass killing of journalists, with as many as 20 reportedly among the dead.

Dozens of gunmen abducted the group of journalists, supporters and relatives of a gubernatorial candidate as they traveled through Amputuan township Monday to file candidacy documents in the provincial capital for May 2010 elections.

The gubernatorial candidate, Ismael Mangudadatu, who was not a part of the convoy, accused a powerful political rival from the Amputuan clan of being behind the slayings. There is a longstanding bitterness between the two families, The Associated Press reports.

Meanwhile, all that changed on Monday with the massacre of more than 40 people, including members of the Mangudadatu clan, in a village of Maguindanao province, where the Ampatuans have ruled unchallenged for years.

The ties that bound the two clans began to fray in May this year when talk spread that Buluan Vice Mayor Esmael Mangudadatu would run for governor of Maguindanao in next May’s elections.

That seemed like a direct challenge on the Ampatuans’ hold on power.

The Ampatuans and the Mangudadatus are both political allies of President Gloria Macapagal-Arroyo.

In the 2004 presidential election, Maguindanao Governor Andal Ampatuan Sr., the patriarch of the clan, proved his worth to Arroyo by delivering votes in massive numbers for her, helping her defeat the late actor Fernando Poe Jr., amid charges of fraud, Inquirer.net reports.