Eight Pakistanis, including policemen and civilians, were reported killed and another 20 have been wounded in the Taliban suicide bomber’s attack on a police station in Pakistan's insurgency infested Northwest Frontier Province. The attack was launched as the Taliban and al Qaeda released propaganda denouncing the Pakistani Army. 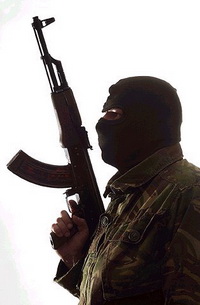 A suicide bomber rammed his car packed with explosives into the Saddar police station in the settled district of Kohat in Pakistan's violent Northwest Frontier Province.

"Some school children are among the dead," a policeman at the scene said, according to a report at Dawn, The Long War Journal reports.

It was also reported, some policemen and school children were among the dead, police said. The police station was severely damaged.

Pakistan has witnessed a string of suicide attacks over the past two weeks that have killed more than 100 people.

The Taliban have claimed responsibility for most of the attacks. They have also warned they will carry out more attacks if the army launches an operation against them in South Waziristan tribal region, Press Trust of India reports.

Meanwhile, rescue work is under way and there are fears that some people may be trapped under the debris, he added. The dead included civilians, among them children, he said, APF reports.