Turkish Police Clashes with Protesters of Alliance Against IMF 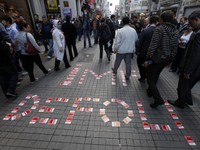 Turkish Police Clashes with Protesters of Alliance Against IMF

The violence came as top officials of the IMF and World Bank wrapped up their annual session and made a public call to establish a "new world order" of economic relations in the wake of the global economic crisis.

On Tuesday, one Turkish newspaper headline read: "Socialists Under Smoke." Another paper headline announced: "While leaders are delivering speeches defending the struggle against poverty at the IMF meetings, protesters outside declared war on the IMF in the name of poverty," CNN International reports.

It was also reported, a crowd of 150 people — most members of fringe left-wing groups — gathered about half a mile (a kilometer) away from the venue of the annual meetings of the IMF and World Bank being held in Istanbul, shouting "IMF get out!"

They shattered the windows of a Burger King fast food restaurant as well as windows of several Turkish and foreign banks in Istanbul's Sisli district. An Associated Press photographer said protesters hurled fire bombs and stones at police.

A group of protesters then made their way to a nearby highway and threw stones at a police vehicle driving past. Police inside the car fired warning shots into the air to try and keep the protesters at bay, The Associated Press reports.

News agencies also report, the Alliance Against IMF-WB and the ÇHD organized a protest yesterday afternoon at 4.00 pm at Taksim square against the police interference at the demonstration. In a press release on Galatasaray Square at 6.00 pm ÇHD published information about the people in custody because of the demonstration.

The police first used tear gas and afterwards made use of water cannons. Not only the demonstrators but also by-passers and journalists were affected by the interventions. Many people were about to faint and laid down on the square.

At the same time a police officer in the district of Tarlarbaşı was hit by a Molotov cocktail. After this incident the police used their firearms against the demonstrators, Bianet reports.