The number of dead in devastating floods caused by torrential rains in India is nearing  three hundred and about a million people have fled their homes, officials said Monday.

More than 450,000 people there have been housed in 1,330 relief camps as authorities completed rescue operations in most of the flooded zones in the state.

Rains have now eased in Karnataka.

In neighboring Andhra Pradesh, authorities put the death toll at 51. Some 531,000 people have been evacuated to safety, with more half of them now sheltering in relief camps, said Dinesh Kumar, the commissioner of the state's disaster-monitoring department.

India has deployed the military to help with relief and rescue in Karnataka and Andhra Pradesh.

More than a dozen teams of naval divers have been sent to the two flood-hit states, the country's defense ministry said. 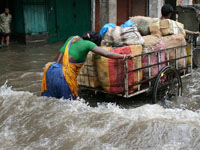 Monsoon in India: Victims' Toll Rises
Air force planes and helicopters have also been dropping food packets in the submerged regions.   The military has been able to rescue 1,336 people so far, it added.

Flood waters were now receding in two of the five worst hit districts of Andhra Pradesh, disaster official Kumar said. But floodwaters from a local river might submerge the remaining three, he warned.

Thousands of people die each year in India during seasonal monsoon rains.

More than 1,100 had been killed in monsoon-triggered flooding in different parts of the country as of last month, according to the disaster-management division of the federal home ministry.
CNN News  contributed to the report.