In Johannesburg there is a measles outbreak and the City appeals to anyone with symptoms to report to a health centre. 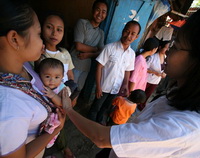 The City's health department says all seven regions have been affected.

"We want people to check their children's immunisation cards and ensure that they are fully immunised," said Joburg's deputy director for communicable diseases, Antonia Barnard.

Children and adults are at risk of contracting the airborne disease, as evidenced in the reported cases. Barnard said teenagers were most affected by the outbreak.

It will respond by immunising all identified contacts at home, school and at the workplace. People who have had contact with an infected person will be given a measles vaccine. The vaccine must be given to the contacts as soon as possible after exposure to be effective, adds the department.

The number of cases in September is a sharp increase from the 11 reported between January and August. "It's mostly affecting people who have never been immunised and those who have never had measles ... anyone with symptoms should see a doctor," said Barnard, Joburg reports.

It was also reported, from January to August there were 11 cases of confirmed measles reported.

"Some of the persons affected had one or two doses of measles vaccine, meaning all persons are at risk of contracting measles," said spokesperson Nkosinathi Nkabinde.

"Measles can affect anyone, including adults. All cases of suspected measles must be reported to the health department as failure to control the spread of measles will result in unnecessary suffering and even death," News24 reports.