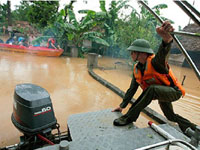 Typhoon Ketsana roared into central Vietnam on Tuesday, killing at least 23 people as it brought flooding and winds of up to 90 mph (144 kph), disaster officials said. Some 170,000 were evacuated from its path.

Ketsana left more than 200 dead across the northern Philippines as a weaker tropical storm.

After gathering strength over the South China Sea, the typhoon made landfall in midafternoon, about 37 miles (60 kilometers) south of Danang, according to the National Weather Center.

"The rivers are rising and many homes are flooded, and several mountainous districts have been isolated by mudslides," Nguyen Minh Tuan, a provincial disaster official said.

As the storm moved inland toward Laos, nine people died in Kon Tum province in the Central Highlands, including a family of five whose house was buried in a mudslide, disaster official Nguyen Van Vy said.

The storm weakened as it approached Laos, and by Tuesday evening, the rain had stopped along some parts of the coast.

River levels were still rising, however, and more rains are forecast for the region Wednesday.

Vietnam Airlines canceled all flights to the tourist destinations of Danang and Hue and travelers were stranded along the central coast, according to The Associated Press' report.