The Philippines Exhausted by Disaster

The Philippines appealed for international help Monday after a tropical storm killed 140 people in the country's north and warned a new storm could strike this week, with tens of thousands of citizens lacking their homes. 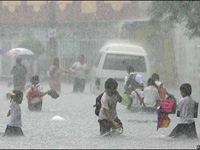 The Philippines Exhausted by Disaster

At least 32 people were reported missing, and authorities were still trying to verify scores of unconfirmed deaths, including in the hard-hit capital Manila and nearby Rizal province, where there were reports that about 99 more people had died, Defense Secretary Gilbert Teodoro said.

Tens of thousands of residents, meanwhile, began a massive cleanup of the carnage left by Tropical Storm Ketsana, which struck Saturday, bringing the region's worst flooding in 42 years and triggering deadly landslides.

The extent of devastation became clearer Monday with mud-covered communities, cars upended on city streets and huge numbers of villagers without drinking water, food and power.

Resident Jeff Aquino said floodwaters rose to his home's third floor at the height of the storm, when it dumped more than a month's worth of rain in just 12 hours.    Aquino, his wife, three young children and two nephews spent that night on their roof without food and water, mixing infant formula for his 2-year-old twins with the falling rain.

Among those stranded by the floodwaters was young actress Christine Reyes, who was rescued by movie and TV heartthrob Richard Gutierrez from the rooftop of her home near Manila after she made a frantic call for help to a local TV network with her mobile phone.

Since the storm struck, the government has declared a "state of calamity" in metropolitan Manila and 25 storm-hit provinces, allowing officials to use emergency funds for relief and rescue.

The homes of more than 450,000 people were inundated. Some 115,000 of them were brought to about 200 schools, churches and other evacuation shelters, officials said. Troops, police and volunteers have been able to rescue more than 7,900 people so far, Teodoro said.

He told a news conference that help from foreign governments will ensure that the Philippine government can continue its relief work. Government welfare officials have begun focusing on providing food, medicine and other necessities to those in emergency shelters.

Teodoro said government forecasters have monitored a low pressure area over the Pacific that could develop into a storm and possibly hit the country later this week, he said.

President Gloria Macapagal Arroyo has said Ketsana and the flooding were "an extreme event" that "strained our response capabilities to the limit but ultimately did not break us."

The United States has donated $100,000 and deployed a military helicopter and five rubber boats manned by about 20 American soldiers from the country's south, where they have been providing counterterrorism training. The United Nations Children's Fund has also provided food and other aid.

Officials expected the death toll to rise as rescuers penetrate villages blocked off by floating cars and debris.

The Philippines is the world's 12th most populous country, with an estimated population of about 92 million people. Its national economy is the 47th largest in the world, with an estimated 2008 gross domestic product (GDP nominal) of over US$ 168.6 billion (nominal).

The 16.7 inches (42.4 centimeters) of rain that swamped metropolitan Manila in just 12 hours on Saturday exceeded the 15.4-inch (39.2-centimeter) average for all of September, chief government weather forecaster Nathaniel Cruz said.

Government forecasters tracked Ketsana moving toward Vietnam on Monday at about 372 miles (600 kilometers) west of the northern Philippines, according to The Associated Press' report.