In Pittsburgh nearly 2,000 demonstrators gather near where G20 leaders will meet today. Clashes with police result in 16 arrests. 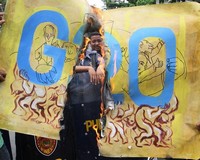 Protesters gathered in Arsenal Park on Thursday with a variety of grievances, setting off some clashes with police, and moved toward the distant convention center where world leaders are set to meet today.

Major economic conferences have become regular targets for protest groups, and it was no different on the eve of the so-called G-20 summit, the meeting of leaders from the world's 20 largest economies.

About the time that President Obama and his wife, Michelle, were stepping off Air Force One, protesters started throwing rocks at police and police cars and dragging trash containers into the middle of the street to block traffic. A few local businesses, including a branch of PNC Bank, had windows shattered by rocks or bricks, Los Angeles Times reports.

It was also reported, in the afternoon, protesters trying to march toward the convention center where the gathering is being held encountered roaming squads of police officers carrying plastic shields and batons. The police fired a sound cannon that emitted shrill beeps, causing demonstrators to cover their ears and back up, then threw tear gas canisters that released clouds of white smoke and stun grenades that exploded with sharp flashes of light.

City officials said they believed it was the first time the sound cannon had been used publicly. "Other law enforcement agencies will be watching to see how it was used," said Nate Harper, the Pittsburgh police bureau chief. "It served its purpose well."

The protesters, who did not have a permit to march, rolled a large blue metal trash container down 37th Street. It stopped short of police vehicles and in front of a women's clothing and shoe boutique called Pavement, The New York Times reports.

In the meantime, protesters complained about the city's response, saying their rights were trampled and that violence would not have broken out if police had allowed the marchers their say.

Jesse Ericson of the Pittsburgh G-20 Resistance Project, an umbrella organization of protest groups, condemned the city for a "bumbling and violent police action."