Gov. Sonny Perdue's announcement followed three deaths in north Georgia's Douglas County; one death in Gwinnett County; and another in Carroll County, where a 2-year-old child was ripped from his father's arms by fierce floodwaters while the father struggled to hold on to bushes, officials said. CNN affiliate WSB-TV later confirmed a fourth death in Douglas County. 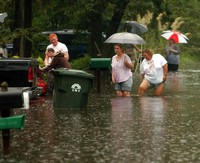 Those counties, near Atlanta, were among the 17 included in the state-of-emergency declaration.

About 100 miles north of Atlanta, in Chattanooga, Tennessee, one person was swept into rushing water and was presumed drowned, said Jeremy Heidt, a spokesman for the Tennessee Emergency Management Agency in Nashville, CNN reports.

In the meantime, the death toll in Southeast flooding has reached eight after rescuers found the body of a 15-year-old boy in northwest Georgia following days of heavy rain that turned docile creeks into surging rivers.

The teen's body was found in the Chattooga River on Tuesday morning.

The Georgia Emergency Management Agency also reported a new death in Douglas County west of Atlanta, bringing the toll in that county to four people. No more details were immediately available.

Other victims have included a 2-year-old boy who was swept away from his family when a creek ripped open their west Georgia mobile home Monday.

Aerial shots showed schools, parking lots and even entire neighborhoods submerged by the deluge, sending some unlucky residents scurrying for higher ground, The Associated Press reports.
The Associated Press qouted DOT spokeswoman Crystal Paulk-Buchanan as saying, "It's going to be a long morning. We're asking people to be patient."

The good news was that the rain was tapering off in many areas. The National Weather Service said there was more rain to come, but the likelihood and severity will decline in the coming days.

Days of downpours and thunderstorms saturated the ground from Alabama through Georgia into eastern Tennessee and western North Carolina, just months after an epic two-year drought in the region ended after winter rains.

As Tuesday rush-hour began in the Atlanta area, Interstate 20 west of the city was closed in two spots by water spilling over the major artery for commuter traffic from the sprawling western suburbs. Portions of at least two other interstates in the metro area were also closed, as was I-75 in Houston County in central Georgia.

Hundreds of roads and bridges were under water or washed out in the Atlanta area and other parts of the state, including 17 bridges on state and interstate highways.

As much as a foot of rain fell over parts of the Atlanta area Monday. The town of Dallas northwest of Atlanta had 16 inches in a 48-hour period, the Georgia Emergency Management Agency said, The Associated Press reports