A Strong Earthquake In Bhutan

A strong earthquake rocked Bhutan on Monday, blocking access roads in the mountainous Asian kingdom and killing at least 8 people. 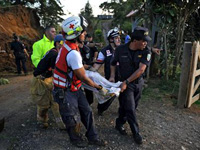 A Strong Earthquake In Bhutan

Rescue teams are en route to the quake-stricken region in eastern Bhutan, but they could be delayed by closed roads. The quake sent boulders down the hillsides, blocking access to some of the remote, hilly regions.

The strong quake destroyed many homes and damaged monasteries, homes and dzongs -- Bhutanese forts. The earthquake had an impact on the infrastructure.

The quake was initially registered at 6.3 in magnitude, but the U.S. Geological Survey -- which measures earthquakes around the world -- later revised the magnitude to 6.1.

Several schoolchildren and monks were treated for injuries sustained in the aftermath, but it is unclear how many people were wounded by the quake. Those injured included two monks who had been trapped inside a collapsed monastery in Bhutan's eastern Tashigang district.

The quake also was felt in India's northeastern Assam state, bordering Bhutan. There were no immediate reports of damage there, however.

Bhutan -- a small, landlocked country in the Himalaya mountains -- is considered one of the world's most isolated countries because of the government's strict regulation of foreign influences, according to CNN International's report .