What happens when Top Chef moves to Las Vegas? If Wednesday’s premiere episode was any indication, there will be showgirls, a sibling rivalry, hot tempers (and food!) and games of chance. The action-packed premiere had the 17 contestants splitting into teams for a classic Quickfire challenge: the mise en place relay race … with a twist. The top teams were asked to compete in a cook-off and the winning chef earned a surprise $15,000 in prize money. 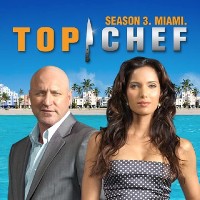 Then with a nod to the “sin” part of Vegas’s Sin City moniker, the chefs prepared a dish inspired by their biggest vice in the first elimination challenge. The results were mixed — with some witty dishes and some “real turkeys,” to quote guest judge Wolfgang Puck , People Magazine reports.

For me, Las Vegas calls to mind gambling, showgirls, and those endless $70 buffets since when I went to Vegas (as a minor), all I could do was watch Cirque de Soleil and eat. (Why did my parents even take me with them?) Gargantuan buffets aside, I consider myself a foodie, a restaurant explorer, and a lover of all things sweet. It's no surprise that I love Top Chef, but watching it on an empty stomach is hazardous, so I recommend accompanying snacks to prevent yourself from licking the TV screen. Now that you've met me, let's meet the contestants! , Entertainment Weekly reports.

For the elimination challenge the chefs were asked to make a dish based on one of their vices. While many chose something related to alcohol or cigarettes, Jen went with her hot temper.

To help demonstrate this vice, Jen decided to make a chile relleno stuffed with seitan. Yep…SEITAN!!! (I couldn’t see how the dish was made, so I’m not sure if the entire thing was VEG, but just using a vegetarian protein is a pretty big deal for a show like Top Chef.) , Ecorazzi reports.