Tom DeLay to Join "Dancing With the Stars" In New Season

Former Republican Majority Leader Tom DeLay will join 15 celebrities from the worlds of entertainment and sports in kicking up their heels on the new season of "Dancing With the Stars. 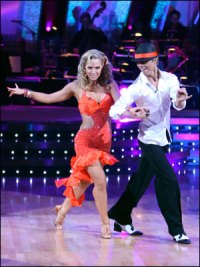 Tom DeLay to Join "Dancing With the Stars" In New Season

So who will be vying for the ballroom's top prize? Kelly Osbourne , daughter of Ozzy, pop singer and former reality star, will find out if her theater experience gives her an advantage. In 2007, she starred as Mama Morton in a West End production of "Chicago." But she'll likely face some stiff competition from R&B singer Mya , who began her career as a professional dancer. It should be interesting to see what dynamic another musical artist, raspy-voiced Macy Gray , adds to the race.

Donny Osmond will make his "Dancing" debut to see if he can outlast sister Marie, who came in third during the show's fifth season , Los Angeles Times reports.

“What am I thinking about,” Osmond said on ABC’s “ Good Morning America ” Monday, when the cast was announced. “Here’s the deal, I’m doing a full production show in Las Vegas with Marie every week, what am I thinking ... I must be an idiot.” , New York Daily News reports.