Angelina Jolie and Brad Pitt Talk about Possibility of Marriage

There is nothing boring about this couple. At Monday night's L.A. premiere of Quentin Tarantino 's Nazi-killing flick "Inglourious Basterds," Angelina Jolie and Brad Pitt dished about their active love life, their twins and the possibility of marriage. 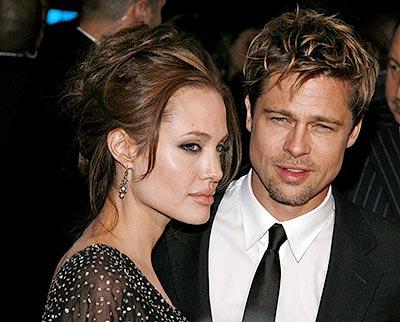 Angelina Jolie and Brad Pitt Talk about Possibility of Marriage

When asked about the secret grotto that Pitt, 45, labeled "a great place for sex" in a recent interview for Parade, Jolie told Extra, "Yeah, well, we got a few special places. You keep it going." , New York Daily News reports.

It's no secret that actor extraordinaire Brad Pitt has a soft spot for New Orleans. He's been living in the city and helping to rebuild the Lower Ninth Ward after hurricane Katrina with his organization the Make it Right Foundation.
Now some New Orleanians are showing their appreciation by campaigning for Pitt to run for mayor in 2010. And they're spreading the word by wearing "Brad Pitt for Mayor" T-shirts , msnbc.com reports.

"It's an old Hollywood property... and (the) rumour is Jimi Hendrix spent some time there. That's the story. I run with it," Contactmusic quoted him as telling U.S. news show Extra. But he added: "We have far more comfortable places to go." , Oneindia reports.