All 13 people on a plane that crashed in Papua New Guinea were found dead. 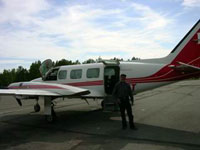 On board were nine Australians, including a father and a daughter, one Japanese and three Papua New Guineans, Sky News reports.

One of the Australian victims has been named as Bendigo man Peter Holliday.

His mother Liz Holliday told ABC Radio her son planned to walk the Kokoda Track with his cousin, in honour of their grandfather who served in World War II, ABC Online reports.

Reacting the accident Prime Minister Kevin Rudd said: "There is a horrible tragedy involved when families send off their loved ones for what they expect to be the experience of a lifetime, only for it to turn into a tragedy such as this."

The twin-engine plane left the capital of Port Moresby en route to an airport near the Pacific island nation's Kokoda Track, a mountainous 60-mile (100-kilometer) trail. The plane's crew radioed air traffic controllers as it was approaching the airstrip, but the aircraft never landed, said Allen Tyson, a spokesman for Airlines PNG, The Associated Press reports.

In the meantime, Australian officials will travel to Papua New Guinea to help probe the cause of the crash, the government said, Bloomberg reports.