According to Afghan officials, at least five rockets have been fired into the Afghan capital, Kabul, injuring a child and causing some damage. 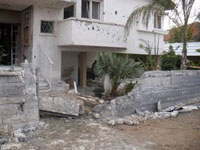 One of the rockets landed in the city's diplomatic area near the US embassy, they say.

Insurgent attacks have increased in the run-up to presidential elections due to take place in Afghanistan on 20 August, BBC News reports.

The rockets, according to the official were fired from Deh Sabz, some 15 km north of the capital city Kabul, Xinhua reports.

“It was very loud, an astonishing sound, I thought at the time that our house had collapsed,” said a 17-year-old high school student who identified herself only as Elaha. She said she was wounded in the arm and chest from a rocket that landed outside her apartment building.

“Later I couldn’t remember what happened, I felt dizzy, and then I saw blood pouring out of my right hand and chest,” she said. She returned home after being treated at a hospital, The New York Times reports.

U.S. Embassy spokeswoman Fleur Cowan says she heard one of the explosions at around 4 a.m.

"We don't have any indication these rockets were targeting any particular site," Cowan said. "They seem to have hit different parts of the city," CNN reports.