Body Found in Search for Cruise Passenger off Alaska

Alaska state troopers have identified a woman believed to have fallen overboard from a cruise ship into frigid Alaska waters as 45-year-old Amber Malkuch (Mal-co) of Washington state. 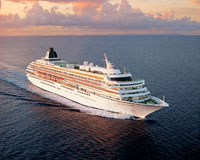 Body Found in Search for Cruise Passenger off Alaska

A woman's body was found Monday afternoon after a massive search but troopers spokeswoman Beth Ipsen says that body hasn't been positively identified.

The body, which has not been confirmed to be that of the passenger, was found on the west side of Douglas Island about 4:30 p.m. PDT, the Coast Guard said. The body has been taken to Juneau, Alaska, to be identified by the local medical examiner’s office.

"The search is continuing," Petty Officer Jon-Paul Rios said. "We do not know for sure if that’s the body; however it is a female and she was found within the search area," The Boston Herald reports.

The woman was reported missing by a friend on Monday morning when the Holland America ship Zaandam was in Glacier Bay National Park about 75 miles northwest of Juneau, Channel 4 News reports.