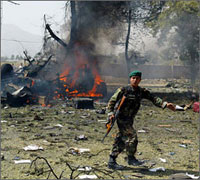 A spokesman for the Defense Ministry says the group of attackers was also armed with AK-47s and rocket grenades. General Mohammed Zahir Azimi says some of the alleged militants were surrounded by Afghan forces, reports VOA News.

"A group of terrorists attacked government buildings and a commercial bank. Three of them carried out suicide explosions and a small group of them are resisting against security forces," General Mohammad Zahir Azimi told AFP.

Surging violence has underscored the vulnerability of the Western-backed government ahead of nationwide polls on August 20, when Afghan President Hamid Karzai stands for re-election.

Also Saturday, a British soldier was killed by a roadside bomb during a patrol in the Lashkar Gah district of Helmand province, the focus of major offensives by U.S. and British forces against the Taliban. The soldier was the 20th British service member killed in Afghanistan this month and the 189th since the war began in 2001, informs CBS News.