The 31-year-old firefighter has become the sixth to die battling an outbreak of wildfires in Spain. 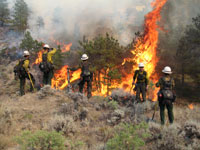 He suffered burns to more than half his body when he was caught out by a sudden change of wind direction and died in a Barcelona hospital, a medical spokesman said on Friday.

The firefighter had been battling an inferno at Horta de Sant Joan in the south of Catalonia when he was caught in the blaze, Aljazeera.net reports.

Four firefighters in the group were killed immediately, authorities said, while several others were injured.

On Thursday, a 44-year-old firefighter died while driving a fire truck to fight a forest fire in eastern Teruel province, the regional Aragon government said on its Web site.

Some 7,000 hectares (17,300 acres) have already burned in Teruel province and Friday there were still various fronts to the fire, CNN partner station CNN+ reported, from the scene.

Aircraft, including planes and helicopters, were being used to fight the fires in the Aragon region, along with hundreds of firefighters in the hilly terrain, much of it with difficult access.

Spanish media reported that a fire in the town of Mojacar, in southern Almeria province, forced the Thursday night evacuation of 3,000 people, CNN International reports.

Meanwhile a European Union monitoring agency has warned that the risk of fire along the Mediterranean coastline remains high with soaring temperatures predicted for the coming days, BBC News reports.