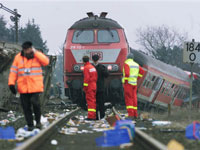 Unofficial reports suggested there may be fatalities, it said. The Jutarnji List daily's website reported, citing medical sources, that there may be three fatalities and more than 40 injured, inform Reuters.

Accoerding to Bloomberg, more than 40 people were injured in the accident, which happened when the whole train unit left the rails today, the Zagreb-based newspaper said on its Web site. The high-speed tilting train was en route to Split, Croatia’s second largest city, from the capital, Zagreb, it said.

The accident occurred at 12.08 p.m., causing the closure of the line between Knin and Split, the Croatian railroad company said in a statement. The railroad didn’t give casualty numbers.

The cause of the derailment was under investigation. Croatian television footage shows one carriage broken in half.

Marinkovic said emergency workers at the scene reported six deaths and 20 injuries. He said 90 passengers were aboard the train.

Hospital officials said 50 people were being treated, with many of them were in shock, informs Courier Mail.