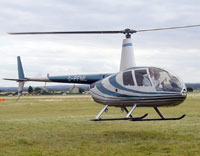 "When emergency personnel arrived, they found a small commercial aircraft, a Robinson 44 helicopter, with four passengers," he said. "I can confirm four fatalities on site as a result of the crash," CNN International reports.

The helicopter was on fire when emergency crews arrived on the scene. There were also a number of power lines down in the area, West Virginia MetroNews reports.

Meanwhile visibility was said to be limited because of fog, but it was not clear if weather played a part in the crash.

According to the Associated Press Storms had passed through the area earlier in the night, BBC News reports.