US Expresses Condolences over Plane Crash

The US government on Wednesday expressed condolences to relatives of the 168 people who were killed when their Caspian Airlines flight crashed in Iran earlier in the day. 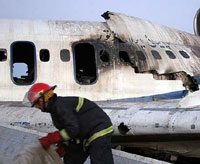 US Expresses Condolences over Plane Crash

Washington "extends it condolences to the families of those who lost their lives in today's crash," read a brief statement by State Department spokesman Ian Kelly.

"We are working through the US embassy in Yerevan and the Swiss Protecting Power in Iran to determine whether any American citizens were on board," the statement said, AFP reports.

An Iranian passenger plane crashed Wednesday morning near the country's northwestern city of Gazvin and all 168 people on board were killed, Iran's state TV IRIB website reported.

"Iran has recovered two black boxes from the passenger plane that crashed in the northwest of the country," its presenter said, giving no further details, Reuters reports.

"Although they are damaged we are hopeful that we can extract information from them," BBC News reports.